We use cookies on our website. They help us get to know you a little and how you use our website. This helps us provide a more valuable and tailored experience for you and others.

You can revoke cookies at anytime at the bottom of the page.

Microsoft Office is one of the most popular business apps for the iPhone and iPad, alongside Apple’s Keynote, Pages and Numbers. In its free version, Microsoft Office enables access to Dropbox. A significant cause of concern for many companies is that this access is not through the standard iOS interface, but via a prohibitive method. This has the disadvantage that access to Dropbox cannot be blocked by a mobile device management system, with the exception of Microsoft’s Intunes.

With iOS 9, Apple has improved its operating system to the point that with just a few simple steps, documents edited in Microsoft Office can no longer be accidentally transferred to Dropbox’s cloud.

All that is required to block the cloud storage provider is a VPN. Even an OpenVPN can be used. The minimum requirement is simply that the native iOS VPN clients, for example IPSec, are supported.

How exactly access to Dropbox is blocked is described step-by-step in the following white paper: http://corporateserver.cortado.com/disable-dropbox-access

A fully functional demo version of the latest software is available at corporateserver.cortado.com/CCS-7-4-trial 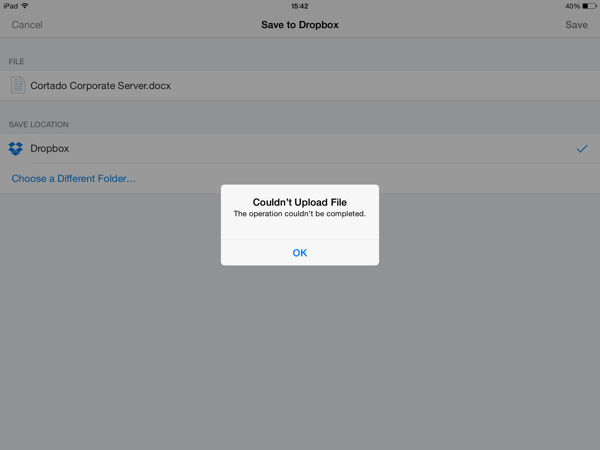 Cortado Mobile Solutions creates enterprise mobility and file sharing solutions for companies, teams and freelancers. Whether on premises or from the cloud – Cortado solutions consistently focus on improving the user’s mobile ability to perform. At the same time, the security requirements of companies are of the highest priority. Cortado Mobile Solutions follows the philosophy that the combination of working with native apps and the use of operating systems’ own security architecture brings the highest levels of user acceptance.

Cortado solutions are developed and tested at its headquarters in Berlin. In addition to the highly qualified consultants in Germany, we also have experts at our branch offices in the USA, UK, Australia and Japan ensuring availability and support for all our global customers.